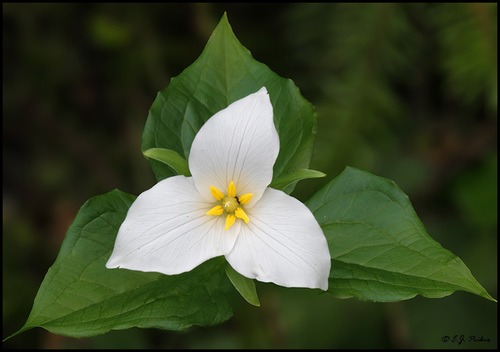 Isabelle Wilson is an internationally renowned medicine woman and herbalist who is known for her work, the Wise Woman Way. In this edition of the series called “Herbs for Labor” written for Birth Institute, she shares how birthroots spread and meander, like life, like childbirth, and how Trillium would be used to support women throughout the lifecycle.

Become a holistic midwife or holistic doula and incorporate this valuable herbal knowledge into your life and career.

“Tomorrow,” said Grandmother as she set off to sleep the winter away. We kept the fire going and took care of all that needed tending, knowing that Grandmother, like sister bear, would emerge from her slumber only when the Earth woke her, when all was ready.

And the long nights passed. It was not the beginning of spring, not sap-starting-to-flow February nor bud-swelling March; but the end of Spring, in leaf-emerging April, that she rejoined us. Eyes twinkling and ablaze, she walked barefoot out the door. We followed.

She headed for the deep woods, the shady woods, the cathedral of nature, the deciduous forest whose thousands of leaves form a green dome when alive, and lush soil when dead. It was still sunny; the trees just beginning to open and spread their leaves. The best time to see the amazing flowers of the medicinal plants that prefer privacy and fertile, well-drained soils.

Further and further she went, until, high, near a rock ledge where a spring gurgled, she sat on the ground, looked slowly around, and turned her keen gaze on us. Her voice was like a chant, like the sound of small animals in the grass, like the shine of trout in the stream.

“Blue cohosh root and black cohosh root, angelica root and dong quai root, wild ginger root and ginseng root, cotton root and birthroot. These are the roots that we use to stir the energy of our root, to strengthen and advance labor, and to bring the babe into our hands.

“Birthing roots are not deep roots; they are hidden roots. They spread and meander, like life, like childbirth. They do not advertise their presence or their powers, but call to us with strange and enticing smells, unusual flowers, and tripartite forms.

“Have we talked about tripartite, or being in three? Three is the number of woman, the number of the Goddess, for She is the Triple Goddess. Maiden she is. Mother she is. Crone she is. Every woman has three parts of her life. And plants that act profoundly on women often show this by having three: three leaves, three petals, three seeds. The stalk of blue cohosh divides into three stalks, each of which has three leaf clusters, which are each comprised of three leaves. The flower of wild ginger has three blood red petals. And birthroot is most commonly known as trillium.

“Trillium, like its other lily sisters is based on three. Look at this pretty red wake-robin, with its three large green sepals, three quite large green leaves, and three red petals.

“Look, but don’t touch, don’t harvest. Leave trillium alone, please. Throughout most of its extensive range, trillium is an endangered or ‘exploitably vulnerable’ plant. Not because First Nations peoples loved it as a cooked green (they did), and not even because it has been overharvested for its extensive medicinal properties (it hasn’t). Trillium is scarce because the deer adore it and because it is a very slow-growing plant. It takes two years for the seeds to germinate, three until the first leaf grows, and 5-17 years before it flowers. A single trillium can live for more than seventy years.

Gently parting the forest floor duff, Grandmother exposes a rhizome as thick, gnarled, and dark as a gardener’s finger. A nauseating odor seems to come from out of nowhere. “‘Stinking Benjamin’ is another name for this remarkable plant, and suggests its use against gangrene,” she explains, while holding her nose and rapidly reburying the root.

“New mothers are more likely to use it to dry the umbilical area and to soothe and toughen sore nipples.

“If we were to harvest this rhizome, we would need to memorize this spot and return in the late fall, after the leaves are gone. Instead, I will give each of you a small amount of birthroot tincture, which will last you for decades. Treat her with the utmost care.

“Birthroot is a true ally to the midwife and the birthing mom. It is one of the most sacred of all the women’s herbs of Turtle Island. Repeated dropperful doses of the tincture, or frequent sips of the tea can be used to initiate labor, keep contractions strong and steady, and reliably quench after-birth hemorrhage.

“Birthroot is an ally for all women in all stages of life. To ease the pain, the profuse menses, and the erratic nature of the first years of bleeding, while calming emotions, clearing up skin problems, and easing hormonal transitions, try a tea of the dried root, taken a sip at a time, up to two cups a day. To calm menopausal distresses, improve and stabilize mood, and counter heavy or prolonged uterine bleeding, steep a tablespoonful of fresh or dried root for ten minutes in milk or water and consume as needed. To check all acute passive hemorrhages – postpartum, menstrual, menopausal, placental, from fibroids, endometriosis, or atonic uterine muscles – try a dose of up to three dropperfuls of tincture of fresh birthroot, repeated as often as needed.

“Regarded as an aphrodisiac, emmenagogue, antispasmodic, alterative, astringent, antiseptic, and diuretic, birthroot offers a host of important constituents like steroidal saponins, tannins, and oils that work powerfully on the uterus, bladder, and vagina. Overdone, she will cause nausea and queasiness. Some folks are even irritated by contact with fresh birthroot.

“We don’t have to worry. We are here to contact the spirit of trillium. Let us join hands and hearts with her. That, for now, is the best way to protect a beautiful plant and get the medicinal value too!”

Susun Weed has appeared on numerous national radio, television, and new-media venues, including National Public Radio, NBC News, CNN, and ABCNews.com. She has been quoted and interviewed in many major magazines, including Natural Health, Woman’s Day, First for Women, and Herbs for Health. She is a contributor to the Routledge International Encyclopedia of Women’s Studies, and writes a regular column in Sagewoman and for Awakened Woman online. Visit her at www.susunweed.com or buy her books Wise Woman Herbal for the Childbearing Year (Weed) and Herbal Healing for Women(Gladstar) at www.wisewomanbookshop.com.

Check out Mountain Rose Herbs for high quality organic herbs to use with your clients.

Become a doula! Provide continuous, culturally competent physical and emotional support to childbearing women and their families in your community or globally.LEARN HOW

Study Global Health Abroad! Make a positive and lasting contribution in the field of women’s health, both in your own community and globally! Join us for an in-depth examination of birth social justice, women’s rights and community health abroad. LEARN HOW